This is a friendly, interactive exchange of information on all Real Estate related subjects.

JULY 14, 2021
Canadian real estate prices are rising at a breakneck speed — even with slowing sales. The RPS House Price Index (HPI) made a huge leap in June for almost all markets. It didn’t matter where, even small towns have begun to outperform big cities. Let’s dive into the frothy month Canada just had.

Canadian Home Prices Are Rising Faster In Small Towns
Canadian home prices have made a sharp climb over the past year, and not just in “hot” markets. According to the National 3500, the index home price reached $733,950 in June. Compared to a year ago, prices are now 19.4% higher. This index measures 3,500 cities and towns across Canada. It provides one of the most comprehensive looks at national price growth.

The firm also produces the National 13, which tracks home prices in Canada’s 13 largest cities. This index shows an index price of $803,261 for June, up 17.5% from the same month last year. Prices are higher in big cities, but the rate of growth is stronger in smaller regions. It’s called price flattening, and means the gap between cities and rural regions is closing. 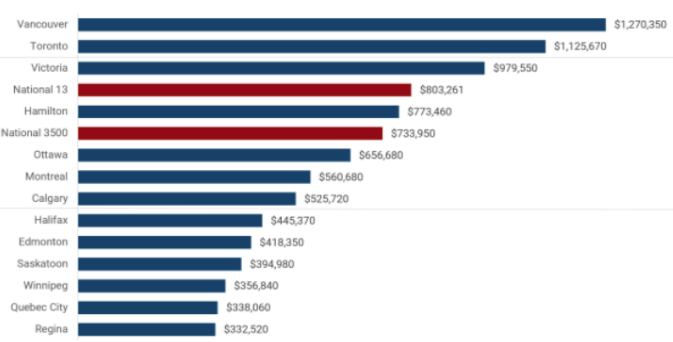 Both aggregate national index measures accelerated in growth from a month before.

Ottawa, Hamilton, And Halifax Are The Best Performing Big Markets
The real estate markets with the largest price growth were Ottawa, Hamilton, and Halifax — in that order. Ottawa’s index price jumped to $656,680 in June, up 25.2% from the same month last year. Hamilton’s index price reached $773,460, up 25.2% over the same period. Halifax came in third with an index price of $445,370, up 24.9% from a year ago. All three markets have seen price growth accelerate from the month before. 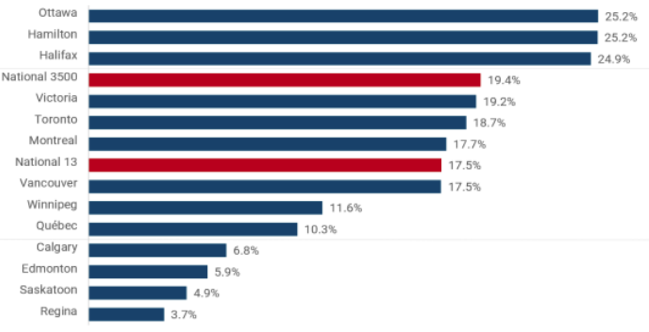 The three markets were the only in the National 13 to see growth rates above 20% in June. Since the National 3500 is nearly at 20% annual growth, it’s safe to assume small markets grew much faster.

Toronto Real Estate Prices Are Up 19%
Toronto real estate is seeing large growth, but underperforming smaller markets. The aggregate index price reached $1,125,670 in June, up 18.7% compared to a year ago. It just outperformed the National 13 average, but came in lower than the National 3500. Higher than typical growth for a big city, but lower growth than smaller regions. But that’s not really breaking news at this point.

Vancouver Real Estate Prices Are Up 18%
The country’s most expensive real estate market is seeing fast growth. The aggregate index price reached $1,270,350 in June, up 17.5% from a year ago. The annual rate of growth is tied with the National 13, and underperformed the National 3500. It performed in line with other big cities, but small towns outperformed.

Montreal Real Estate Prices Are Up 18%
Montreal real estate prices are cheaper than the national average, but may not be much longer. The index price reached $560,680 in June, up 17.7% from the year before. Growth is faster than the National 13, but lower than the National 3500. It’s moving fast for a big city, but not as fast as some small towns. Though it might cost the same to buy, considering how expensive small towns are now.

Canada is seeing home prices rise almost everywhere, and not by a little either. National growth is well into the double digits, and nearly at 20% by one measure. When prices climb everywhere, it’s usually due to an overly easy credit supply. That or all 3,500 markets across the country are all of a sudden the next Manhattan.
Top
Post Reply
1 post • Page 1 of 1

Users browsing this forum: No registered users and 2 guests